Besides testing the industrial production of SAF, the BIO4A project is also exploring innovative solutions to produce Camelina oil as an alternative feedstock the waste and residual lipids, while at the same time increasing soil resilience towards climate change in Southern EU/MED Countries. By adopting a combination of biochar and other soil amendments, the research aims at developing a cost-effective long-term strategy to increase the fertility of the soil and its resilience to climate change, while at the same time storing fixed carbon into the soil and producing a low-ILUC biofuel from Camelina.

As part of this research program, the project has been perfecting a processing unit which will test the production of biochar (and energy) through slow pyrolysis using agroresidues as feedstock.

A report by RE-CORD illustrates the upgrades the pilot unit underwent in order to avoid some inconveniences that occurred in early iterations of the production testing process.

Before the recent upgrades, small wood chips used as input would get sucked into the gas line of the unit together with pyrolysis vapours after having been carbonized and turned into biochar. This caused some failures and blockages of the gas line which would also occur when using agroresidues (smaller than wood chips on average) as input. In addition, the old configuration experienced malfunctions due to excessive fouling and condensation of pyrolysis vapours. Thus, among other things, the unit has been equipped with filtering elements to prevent carbonized agroresidues from being sucked into the gas line, and nine electric band heaters have been installed to maintain a higher average temperature of gas flow and avoid condensation of pyrolysis vapours.

Thanks to the aforementioned upgrades and a plethora of other improvements, the pilot unit is now ready to start testing the production of biochar using agroresidues. 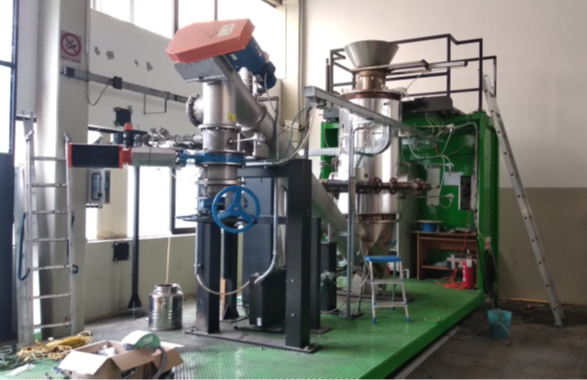 Picture of the
new pilot configuration