The recast of the EU’s Renewable Energy Directive (RED II) moves in the right direction to incentivize the use of SAF, but mandates and more dedicated policies at a European level are needed to further stimulate investments in the industry and overcome the hurdles facing the uptake of SAF.

The critical points, the strengths and the risks for the SAF industry included in the new RED II are explored and displayed in a report published by the consortium of BIO4A. In order to assess the progress on SAF-relevant policy in the EU, the report presents a recap of the main elements of the first RED (2009), an overview of its implementation in The Netherlands, and finally a summary of the new RED II which highlights the most important novelties, the hurdles and the opportunities it creates for the uptake of SAF.

The RED II sets the target of a 14% share of energy in the European transport sector being generated from renewable sources by 2030. To this aim, the directive introduces two new major incentives to improve the sustainability performance of the aviation industry: first, the renewable fuel supplied to the aviation (and maritime) sector will count as 1.2 times its energy content to reach the 14% target and second, the renewable fuel produced by one of the items included in an approved list of sustainable waste-based feedstocks (Annex IX A to the RED II) will count twice its energy content to reach the 14% target. This creates an opportunity for the aviation sector to be fueled by waste based SAF which will count 2.4 times its energy content towards the achievement of the 14% goal. This mix of incentives poses the foundation for the successful marketability of SAF, but only in a scenario where the provision of renewable energy is rewarded with the generation of tradeable assets with a monetary value proportional to the energy content produced. For this reason, the non-compulsory nature of the implementation of the elements of RED II in each EU member state represents a risk to a harmonized uptake of SAF in all of Europe. Finally, the list-based approach for the sustainable production of waste-based biofuel poses a risk to the utilization of many other feedstocks which could diversify the input pool for biofuels, thus creating a more resilient and sustainable supply chain for SAF.

The report recommends that EU member states implement national mandates for the use of SAF between 3 and 5 years in advance and with a long enough duration (10-15 years) in order to leave enough time for the industry to ramp up production capacity and give investors a trustworthy investable timeline. Also, European governments should provide (financial) assistance to develop the technology and a diversified feedstock pool to produce SAF, for example the use of cover-crops and biochar to take away the pressure on the waste oil markets, while at the same time creating appropriate price incentives and disincentives to ensure that obligated parties abide to the mandates. 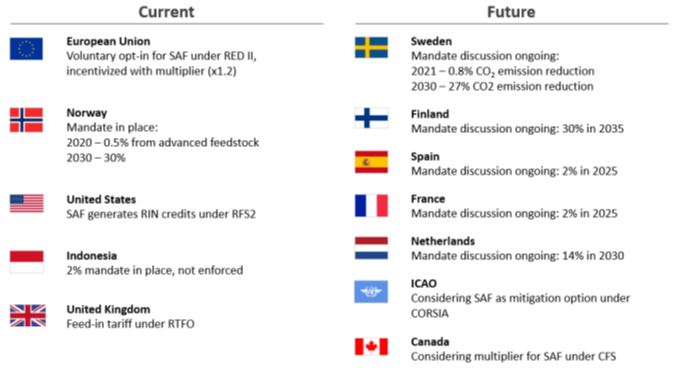