Since its inception, the BIO4A project has been investigating new technologies to store carbon into the ground and improve the fertility of soil by producing biochar from different feedstocks. A recently published report compares the characteristics of biochar produced from chestnut wood (Castanea sativa Mill.) and from wheat straw agroresidues (Triticum aestivum L.) and illustrates the process of producing COMBI, a substrate obtained through co-composting blends of biochar with solid fraction of digestate from a biogas plant.

Wood based biochar is of higher quality compared to agroresidues based biochar and will be used both directly and in co-composted biochar (COMBI) to test its potential as a soil amendment.

First, the results of the analyses for the characterization of biochar from both wood chips and agroresidues are presented in terms of content of fixed carbon, ash and water, and of ratios of main chemical elements (C, H, N, O). These figures are then complemented with the results from evaluations for surface and porosity characterization (Nitrogen-based BET method) and with graphics displaying pore size distribution obtained through density functional theory (DFT) analysis. The report then presents the characterization analyses’ results for the solid digestate and bulking agent (cereal straw) that were used in combination with chestnut wood biochar to create COMBI. Finally, the process of how COMBI was produced with different ratios of biochar and solid digestate is laid out in detail.

The characterization analysis show that chestnut wood-based biochar is better than its agroresidues-base counterpart, since it has a far greater specific surface area, a higher amount of fixed carbon and a much lower ash content. The fixed carbon present in biochar is very stable to thermochemical and biological degradation, thus a higher percentage of fixed carbon can positively correlate with the potential of biochar to permanently store atmospheric carbon into the ground. Furthermore, the higher specific surface area of wood-based biochar indicates a better Water Holding Capacity compared to agroresidues-based biochar. For these reasons, wood biochar was chosen over agroresidues biochar to produce co-composted biochar together with solid fraction of manure-based digestate and cereal straw. The COMBI was produced in Florence, Italy over a period of 60 days in a set of four windrows, one with a mix of digestate and straw only and the remaining three with an increasing biochar content rate. The windrows were then analyzed, and the digestate and straw only mixture proved to be the one closer to the optimal values for composting reported by scientific literature, albeit lacking the carbon storing benefits provided by the biochar. 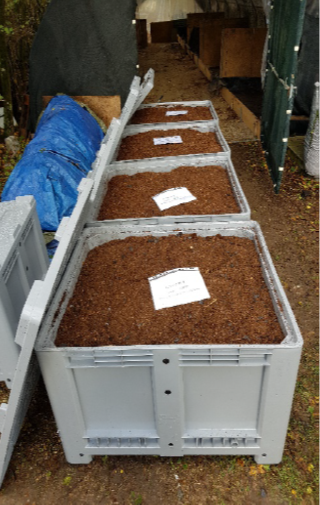 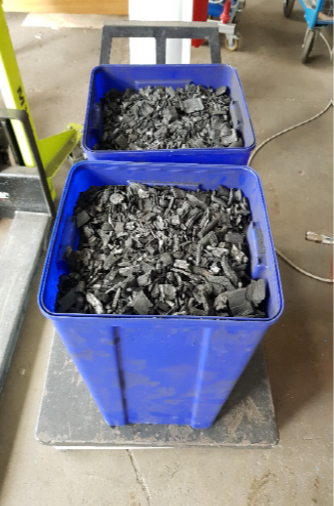