The HEFA or HVO technology is one of the few pathways able to produce Sustainable Aviation Fuels. Multiple technology providers have developed their own hydro processing technology, all with their own characteristics, but although the installed capacity for HVO/HEFA (Hydrotreated Vegetal Oil / Hydroprocessed Esters and Fatty Acids) facilities exceeds 5 million tonnes of production per year, only approximately 10,000 tonnes of HEFA-based jet fuel is produced each year.

A report produced by BIO4A’s consortium assesses the business case for a medium sized refinery producing HEFA-based SAF, in a regulatory environment based on current Dutch policies, evaluating its financial feasibility by calculating standard financial metrics, and highlighting the turning points that could make the case work.

The report finds that an industrial-scale facility producing SAF through HEFA technology would be financially viable given the current value of incentives, but newly designed dedicated policies are needed to ensure the uptake of this technology.

The report carries out a techno-economic assessment (TEA) of a fictitious HEFA-based SAF refinery located in Europe and working with a scale of 500,000 metric tons of waste feedstock as input over a time span of 25 years. Each ton of fuel produced has an assumed policy value of 554 EUR based on the average value of ‘Renewable Fuel Units’ (‘HBEs’) from the Dutch incentive system between 2015 and 2019. The capital expenditure (CAPEX) for the realization of the refinery is set to EUR 480 million, based on similar existing facilities and calculated through means provided by scientific literature.

The economic viability of an HEFA case is driven by four main elements:

– The cost of feedstock

The TEA’s results show that the business case heavily relies on the policy incentives assumed to be in place, which generate value in the form of HBEs, whose price is magnified by the 1.2 multiplier for renewable energy in the aviation sector and the double counting rule for waste-based biofuels included in the EU Renewable Energy Directive II (RED II). Since HBEs are tradeable assets that can be sold to other parties obligated to meet the sustainability targets of RED II, they would represent a source of income for a HEFA-based SAF refinery, thus their selling price is an important factor in this scenario. The business case shows a high sensitivity to fluctuations in policy values when compared to fluctuations in other market forces such as input prices (feedstock and hydrogen) and CAPEX.

BIO4A’s report highlights the challenge that volatile market forces pose to the production of HEFA-based SAF and stresses the pivotal importance of policy value for the financial viability of the industry, finally calling for the implementation of specific policy to stimulate the industrial growth and uptake of HEFA-based SAF. 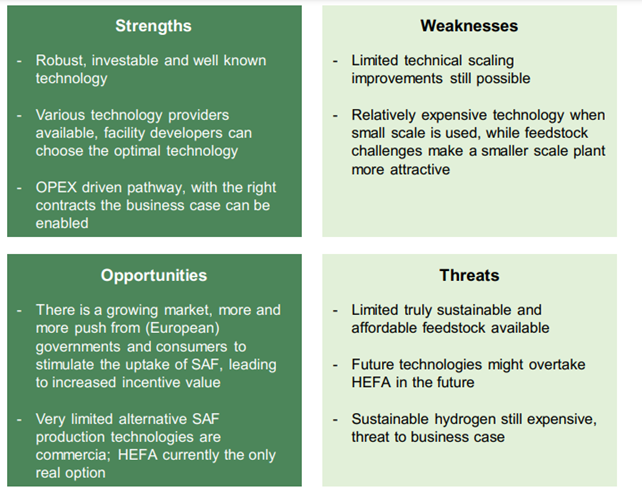