An overview of the market dynamics shaping the SAF industry

Price premiums and the competition with production of biodiesel are the main hurdles to the development of the SAF industry; specific policies in the form of mandates and incentives are needed to generate consistent demand and ensure the commercial uptake of SAF.

As part of its effort to test the commercial viability of HEFA-based SAF, the BIO4A consortium recently published a report that identifies and discusses the most important market dynamics which are influencing the market uptake of SAF.

The document first provides a summary of the current state of the SAF market in terms of current and foreseeable technological pathways, production capacity and demand, then assesses the existing policy incentives which aim to improve the sustainability of the aviation sector at the national and international level, and how they influence the SAF industry. The report proceeds to list and compare the schemes and criteria that are being employed to certify the sustainability of SAF, which is still for the most part free from any mandatory sustainability standard at a global level. Finally, an estimation of the market price for SAF is presented under different policy scenarios and compared to the pricing process of A1 fossil jet fuel.

Even though the industry has made significant progress since its inception in the early 2000s, the current economics of SAF still represent the main hurdle to its usage. The lack of SAF-dedicated incentives and the more stringent requirements of the aviation industry tend to push available and new biofuel production technology towards other end markets such as the provision of biodiesel to the road transport sector, which is currently the main target of the HEFA refineries which could produce SAF at a scale. Furthermore, most existing policy frameworks, albeit including the possibility to reduce carbon emissions in the aviation sector using SAF, do not include a mandate for the uptake of SAF and don’t allow the production of SAF to generate value (such as the Dutch HBEs). These dynamics do not stimulate demand (thus investments) for SAF and force the selling price of SAF to include a high premium which often makes the purchase of carbon offsets the preferred option to cost-effectively improve the sustainability performance of airline operators.

The report stresses the importance of dedicated policy frameworks, mandates and incentives to improve the marketability of SAF and ensure its commercial uptake at scale. As a final remark, the report highlights the need for mandatory sustainability standards to guarantee that the health of lands and ecosystems, the economic stability of communities and the labor rights of workers are protected along the production process of SAF. 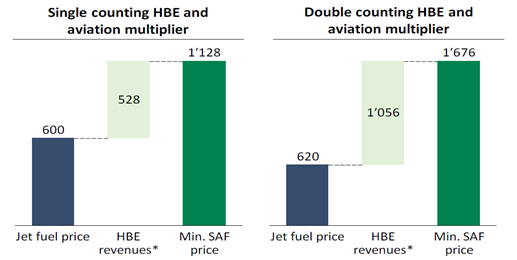 Calculated minimum SAF prices based on the conventional jet fuel price and the revenues from sales of HBE’s certificates in two scenarios (€/t). * Based on HBE average price in 2019 (10€/HBE) 44GJ per t of jet fuel and including the 1.2x multiplier